I spoke yesterday here of my support for the civil war in Libya and the way Obama pursued it.  But I'm never sure of these things, so I'm always looking for an articulate opinion from the other side.  So, for a different take of the capture and execution of Gaddafi, that of the Left as represented by the website Counterpunch and Vijay Prashad, read the following: 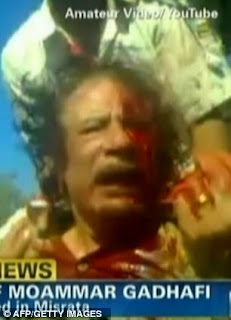 On the dusty reaches out of Sirte, a convoy flees a battlefield. A NATO aircraft fires and strikes the cars. The wounded struggle to escape. Armed trucks, with armed fighters, rush to the scene. They find the injured, and among them is the most significant prize: a bloodied Muammar Qaddafi stumbles, is captured, and then is thrown amongst the fighters. One can imagine their exhilaration. A cell-phone traces the events of the next few minutes. A badly injured Qaddafi is pushed around, thrown on a car, and then the video gets blurry. The next images are of a dead Qaddafi. He has a bullet hole on the side of his head.

These images go onto youtube almost instantly. They are on television, and in the newspapers. It will be impossible not to see them.

The Third Geneva Convention (article 13): “Prisoners of war must at all times be protected, particularly against acts of violence or intimidation and against insults and public curiosity.”

The Fourth Geneva Convention (article 27): “Protected persons are entitled, in all circumstances, to respect for their persons, their honor, their family rights, their religious convictions and practices, and their manners and customs. They shall at all times be humanely treated, and shall be protected especially against all acts of violence or threats thereof and against insults and public curiosity.”

It would have been inconvenient to see Qaddafi in open court. He had long abandoned his revolutionary heritage (1969-1988), and had given himself over to the U. S.-led War on Terror at least since 2003 (but in fact since the late 1990s). Qaddafi’s prisons had been an important torture center in the archipelago of black sites utilized by the CIA, European intelligence and the Egyptian security state. What stories Qaddafi might have told if he were allowed to speak in open court? What stories Saddam Hussein might have told had he too been allowed to speak in an open court? As it happens, Hussein at least entered a courtroom, even as it was more kangaroo than judicial.

No such courtroom for Qaddafi. As Khujeci Tomai put it, “Dead men tell no tales. They cannot stand trial. They cannot name the people who helped them stay in power. All secrets die with them.”

Qaddafi is dead. As the euphoria dies down, it might be important to recall that we are dealing with at least two Qaddafis. The first Qaddafi overthrew a lazy and corrupt monarchy in 1969, and proceeded to transform Libya along a fairly straightforward national development path. There were idiosyncrasies, such as Qaddafi’s ideas about democracy that never really produced institutions of any value. Qaddafi had the unique ability to centralize power in the name of de-centralization. Nevertheless, in the national liberation Qaddafi certainly turned over large sections of the national surplus to improve the well-being of the Libyan people. It is because of two decades of such policies that the Libyan people entered the 21st century with high human development indicators. Oil helped, but there are oil nations (such as Nigeria) where the people languish in terms of their access to social goods and to social development.

By 1988, the first Qaddafi morphed into the second Qaddafi, who set aside his anti-imperialism for collaboration with imperialism, and who dismissed the national development path for neo-liberal privatization (I tell this story in Arab Spring, Libyan Winter, which will be published by AK Press in the Spring of 2012). This second Qaddafi squandered the pursuit of well-being, and so took away the one aspect of his governance that the people supported. From the 1990s onward, Qaddafi’s regime offered the masses the illusion of social wealth and the illusion of democracy. They wanted more, and that is the reason for the long process of unrest that begins in the early 1990s (alongside the Algerian Civil War), comes to a head in 1995-96 and then again in 2006. It has been a long slog for the various rebellious elements to find themselves.

The new leadership of Tripoli was incubated inside the Qaddafi regime. His son, Saif al-Islam was the chief neoliberal reformer, and he surrounded himself with people who wanted to turn Libya into a larger Dubai. They went to work around 2006, but were disillusioned by the rate of progress, and many (including Mahmud Jibril, the current Prime Minister) had threatened to resign on several occasions. When an insurengy began in Benghazi, this clique hastened to join them, and by March had taken hold of the leadership of the rebellion. It remains in their hands.

The manner of Qaddafi’s death is a synecdoche for the entire war. NATO’s bombs stopped the convoy, and without them Qaddafi would probably have fled to his next redoubt. The rebellion might have succeeded without NATO. But with NATO, certain political options had to be foreclosed; NATO’s member states are in line now to claim their reward. However, they are too polite in a liberal European way to actually state their claim publically in a quid-pro-quo fashion. Hence, they say things like: this is a Libyan war, and that Libya must decide what it must do. This is properly the space into which those sections in the new Libyan power structure that still value sovereignty must assert themselves. The window for that assertion is going to close soon, as the deals get inked that lock Libya’s resources and autonomy into the agenda of the NATO states.

Posted by Carl Lindquist at 2:00 PM