'Tip of the Hat' to Obama on Libya

I haven't posted very much on the Libyan situation because I haven't known what to make of it exactly.  (Am I the only one in the situation?)  Being a child of the 60s, I think I am congenitally opposed to US military and/or covert interventionism abroad.  And after our recent disastrous invasion of Iraq and our current war in Afghanistan, I am even more so. 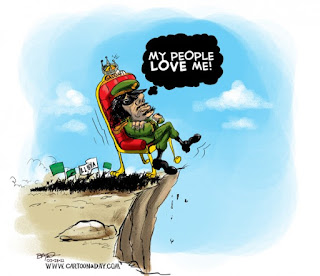 So when our government--it doesn't really matter which political party is in control--tells us that they're doing a military intervention in an oil-rich nation for humanitarian reasons (Libya), my bullshit indicator goes into the red zone.  I think we need to be skeptical when it comes to such things, and not just take the government's 'word' for it.

Given that the Libyan civil war seems to have ended, for all practical purposes, with long-time dictator Gaddafi (why are there a million ways to spell his name?) captured and killed, I thought I would take the time I needed to read up on the relevant issues, viz. the participants in the anti-Gadhafi forces, the recent history of Libya (by which I mean the last century), the nature of our military intervention, etc.

Here are my conclusions.  The anti-Gaddafi coalition--called the NTC or National Transitional Council--is made up of mostly good people (with a few bad ones, i.e. Islamists).  The leadership seems to be composed of legitimate democratic Libyans who are desperate to leave behind the Gaddafi years and move into something new, in line with the 'Arab Spring' sweeping across much of the Middle East.

For example, the President of the NTC is Mustafa Abdul Jalil, a native Libyan who has served various judicial position in the Libyan government, most recently as a minister of Justice for the last four years.  Having had enough of Gaddafi injustice, he broke from the regime and joined the uprising within the last year.

Mahmoud Jibril is an American trained economist who served the last four years in the Gaddafi regime as head of the National Economic Development Board.   He serves as the interim Prime Minister of the NTC, having gone over the resistance.   Also Ali Tarhouni, who looks to be the most American connected of the leaders, has been in the US since the 70s, is an economist, and serves as the Finance/Oil Minister in the NTC.

It would appear from what I read that the resistence to Gaddafi was widespread in Libya, though it started in Benghazi along the eastern Mediterrean shoreline.  It was widespread because of pervasive unhappiness with the lack of democratic rights, endemic economic problems, the corruption within the government, and the recent wave of democratic protests across north Africa.

The other aspect of this Western intervention was the truly coalition nature of it, comprising military forces from dozens of Nato countries, as well as participation from some non-Western countries as well, such as Turkey and Qatar.  The United States has had a military role, to be sure, but not nearly the extent that we have seen in Iraq or Afghanistan.  The number of coalition military air 'sorties' were in the hundreds, if not thousands, and there undoubtedly was much collateral destruction.  But it also had the backing of the UN Security Council and the International Criminal Court.  So it seems that all the bases were covered were a truly legitimate and legal action against a despotic government.

(Having said all this, it is true that Western nations will now benefit from the flow of oil from Libya, especially as opposed to the Chinese, who were fast involving themselves in Libya under Gaddafi.  So at least a part of this effort strategically is an attempt to put a roadblock on the Chinese on the African continent.)

But, from what I can tell from my all-too-brief self-orientation, this Libyan intervention has been a complete success, and for many of the right reasons that all 'freedom-loving' people should be able to support.  And so, as Stephen Colbert would put it, the Libyan intervention gets a 'tip of the hat'!
Posted by Carl Lindquist at 2:34 PM