Social Security: A Safety Deposit Box With Nothing But IOUs In It

It's rare to find a decent analysis of Social Security in the MSM, so this weekend's article in the WaPo is worth posting. 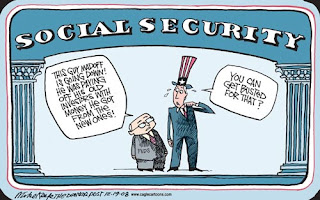 Social Security is so fundamental to the well-being of our aged population--now and in the future--that every effort must be made to resolve the problems and get it to a solvent fiscal position.  Yet as the article points out, our current political impasse is preventing that from happening.

And now, due to the economic downturn, along with the payroll tax cut agreed to by Obama and Congress, Social Security has gone 'cash negative', in that there is less coming in by way of tax revenues than outgoing in the way of benefits being paid out.  And the so-called Trust Fund (you know, the one in the lock box)?  Read on (and weep):

For most of its 75-year history, the program had paid its own way through a dedicated stream of payroll taxes, even generating huge surpluses for the past two decades. But in 2010, under the strain of a recession that caused tax revenue to plummet, the cost of benefits outstripped tax collections for the first time since the early 1980s.

Now, Social Security is sucking money out of the Treasury. This year, it will add a projected $46 billion to the nation’s budget problems, according to projections by system trustees. Replacing cash lost to a one-year payroll tax holiday will require an additional $105 billion. If the payroll tax break is expanded next year, as President Obama has proposed, Social Security will need an extra $267 billion to pay promised benefits.

Social Security is hardly the biggest drain on the budget. But unless Congress acts, its finances will continue to deteriorate as the rising tide of baby boomers begins claiming benefits. The $2.6 trillion Social Security trust fund will provide little relief. The government has borrowed every cent and now must raise taxes, cut spending or borrow more heavily from outside investors to keep benefit checks flowing.

Created during the Great Depression, Social Security grew in popularity as Congress repeatedly raised benefits through the 1950s and 1960s and then, in the 1970s, set initial benefits to rise automatically with wages and with inflation thereafter.

Those changes made the program vastly more expensive than the “old age and survivors” insurance originally envisioned by President Franklin D. Roosevelt. He wanted to protect workers and their families from financial hardship due to death, disability or aging. Retirement benefits were available at 65, at a time when life expectancy was significantly lower than today.

No crystal ball is necessary to predict Social Security’s future. Hard numbers tell the story. Social Security supports about 55 million people. By 2035, that figure will swell to 91 million. Today, for every person claiming benefits, there are three workers paying into the system. By 2035, there will be two.

Congress foresaw this as early as 1983. Inflation had driven the program’s costs through the roof. After decades of expansion, Congress finally had to scale back the program, choosing to tax wealthier retirees’ benefits and gradually raise the retirement age to 67.

Those changes, along with other adjustments, restored solvency and promised yearly surpluses that would build up the trust fund in preparation for the retirements of the baby boom. The surpluses were invested in special Treasury bonds, which, by law, must be repaid with interest.

Assuming they are, Social Security can pay full benefits through 2036. Once the trust fund is depleted, the system would rely solely on incoming taxes, and benefits would have to be cut by about 25 percent across the board.

Several factors have disrupted even that timetable. The recent recession caused the program to go cash negative years earlier than expected. The payroll tax holiday is depriving the system of revenue. And 10 years of escalating debt have crippled the government’s ability to repay the trust fund.

Certner, of the AARP, said it is unfair to cut Social Security benefits to solve that problem.

“The federal government is saying, ‘We’re in the red right now and we’re having trouble paying back Social Security, so we’d like to cut Social Security benefits,’ ” Certner said. “But that’s not the deal.”

Others argue that the deal has long since been abandoned and that the trust fund has become a fiction of accounting. “We can debate until the cows come home whether there’s really a trust fund or not,” said Olivia Mitchell, a professor at the University of Pennsylvania’s Wharton School who served on a 2001 presidential commission to study Social Security. “But the fact is, there’s no money available to pay for those benefits. And the system is short on cash now.”

Notice a couple of things.  First of all, as the article makes clear, the 'payroll tax holiday' is hurting the long-term fiscal outlook of Social Security.  So this is Obama's way of helping working class Americans?  Tax relief in the short term that hurts them in the long run?  I thought that was the case when those tax cuts were announced, but this is the first time I've seen it put that way.  How do they explain this?  I don't know, but perhaps it's that since the lower working class and working poor don't pay income tax but do pay payroll tax, they figure that tax cut goes to everyone.

Second, there is supposed to be about $2.6 trillion dollars in a Social Security Trust Fund.  This is money that you and I have paid into Social Security through our (regressive) payroll taxes lo these many years, that was over and above what was immediately needed for benefits.  Well guess what, all there are is a bunch of IOUs in the form of US Treasury Bonds.  In other words, our payroll taxes have been going to buy tanks, airplanes, aircraft carriers, wars, tax cuts for wealthy folks, etc.  That is a gross misuse of those taxes, since they tend to be regressive in nature and should be reserved for Social Security.  How do they justify this?

Using the Trust Fund that way is like putting money in a shoe box for your vacation, then taking the money out to pay for some new furniture and putting an IOU into the box, thinking you'll pay it back before vacation comes along.  But when July comes along and you go to the shoe box to get the money for your trip to the beach, all you've got are IOUs.  Trouble is: BEACH HOTELS DON'T TAKE IOUs!

In other words, using the Trust Fund/Payroll Tax money to buy US Treasuries, thinking that's a good investment, was little more than fraudulent accounting.  Congress has taken the money that was designated to paying Social Security benefits for years and used it for all kinds of other things.  "Oh, we'll put it back when the time comes!"  Yeah, right.

So what can be done about it?  Most Americans are counting on that basic support for retirement income, and with pensions going the way of the giant woodpecker, they will need it in the future more than ever.

Since Obama and the Congress don't seem to be able to get any leverage on this issue, I think we've got another issue for the Occupy movement.  (That gives you confidence, doesn't it.)
Posted by Carl Lindquist at 5:02 PM