And while I was researching the Libyan issue, I took a few moments to look into Obama's decision to give the Ugandan government some US Special Forces military advisors to help them eliminate, for once and for all, the Lord's Resistance Army (LRA).  This was something I knew little about.  And it was recently (and naively) criticized by Rush Limbaugh (who I'm sure would have loved it if it were George W. Bush doing it), as a case of going after Christians, when in fact, it's really the opposite, a matter of protecting Christians. 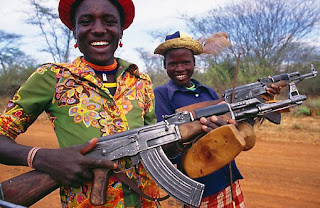 As I said in the last post, I am somewhat allergic when I hear 'military advisors'.  It goes back to the Kennedy decision to put military advisors into Vietnam, which led to our complete debacle there.

Anyway, I came away from my reading with the feeling that this was a justifiable decision on Obama's part, in that the LRA, led by Joseph Kony, has been a scourge to the central part of Africa over the last several decades, committing numerous atrocities and massacres against unarmed civilians (many of them Christians in churches) not only in Uganda, but also in Sudan, the Congo, and the Central African Republic.  This kind of 'terrorist' group, comprised largely of 'child soldiers' wrecks havoc and sows disorder and chaos, and that's not good.  The governments of the countries involved have made efforts to defeat the LRA, but have simply not had the wherewithal to do it.

So, until I read something that sets off an alarm in my head, I'm ready to give Obama my support in this endeavor.  It seems like a good way to use our armed forces.
Posted by Carl Lindquist at 2:59 PM