Since I was touting Jon Huntsman last spring when he first arrived on the Republican scene, fresh from his Chinese ambassadorship, it's only fair that I bid him adieu, since he's clearly not going anywhere.  His poll numbers haven't moved and he remains in the low single digits, which, except for the big zero, is as low as you can go.  So, my favorable articles were clearly wishful thinking, and I hereby don sack cloth and ashes. 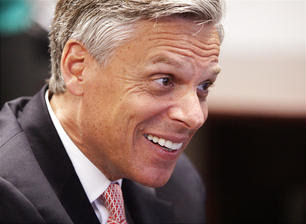 To help me write the eulogy is Frank Bruni of the NYT:


Forget 9-9-9; someone call 9-1-1. Huntsman has flat-lined. It actually happened a while back — a few nanoseconds after his campaign began, to be precise — but until recently it was possible to hold out hope for resuscitation. No more. His steadfastly abysmal poll numbers suggest that nearly four months since he announced his candidacy, you’d be hard-pressed to find enough Huntsman supporters to occupy so much as a dinghy bobbing in the water near Wall Street.

The contrast between the promise of his debut and the reality of his denouement is stunning, one of the 2012 election cycle’s most interesting arcs. One of its most illuminating, too. Sometimes the losers tell us as much as the winners. In that sense alone, Huntsman is a spirited chatterbox.

For starters he proves the limits of the mainstream news media’s sway. He got a dazzling sunburst of attention at the outset, including a lengthy profile in this newspaper’s Sunday Magazine, and the pundits salivated and swooned. On the MSNBC news show “Morning Joe,” Mark Halperin told his rapt tablemates that he was “blown away” by an early Huntsman swing through New Hampshire. The messiah had come, and voters were instructed to worship him.

They didn’t. Not then. Not ever. Instead they flirted with Michele Bachmann and then two-stepped with Rick Perry before high-fiving Herman Cain, even though that tax plan of his sounds more like numerology than economics. Cain was polling well above 15 percent nationally by the time reporters and pundits fully got around to him. Turns out he didn’t need us. Huntsman has been lucky to get 3 percent, and in some polls makes do with 2 or 1. Factor in the margin of error and he’s in negative integers. Nifty trick, that.


[The Republican] nominating process, controlled by the religious warriors and anti-government agitators who dominate straw polls, has reached its logical conclusion: The hottest candidate in the field is Herman Cain, a fast-food tycoon who never heard of neoconservatism, has never held office, has no foreign policy and a three-digit number for a domestic policy, and likes to joke about electrocuting illegal immigrants. By contrast, Jon Huntsman, governor, ambassador, the man who in a normal political environment would be the most qualified and formidable candidate in the race, wasn’t even on the stage.

A system that rejects a Jon Huntsman in favor of a Herman Cain isn’t a primary process. It is a primal scream.

Facing the humiliation of being topped by the pizza man, Huntsman boycotted the Nevada debate (given his poor standing in the polls, he might not have been invited anyway) and retreated here to New Hampshire to make his last stand.

It says a great deal about the state of the Republican nominating process that Huntsman is floundering while Mr. Pizza soars. “It’s a new world,” Huntsman told me as we spoke Tuesday in the lobby of his Manchester hotel. “You throw out anyone with any connection to real-world experience in government.”

Posted by Carl Lindquist at 7:24 PM