I've been a silent, stay-at-home supporter of OWS for weeks now.  Protesting has never been my thing, I guess, even in college many decades ago when many of my generation and peergroup were taking to the streets and college administration buildings against the Vietnam War.  I was also against the war, but couldn't bring myself to physically protest.  Oh well, my bad. 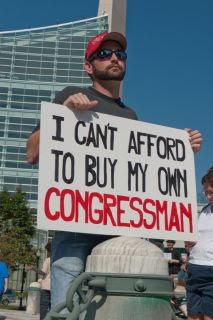 Anyway, I've been pleased that a new generation has taken to the (Wall) street and the parks of cities all over the country (and I've promised my son that I will go to one of the protests here locally, if possible).  Not that I'm necessarily very hopeful about real change.  The system is rigged and those who did the rigging are not going to surrender easily or quickly, if ever.  They have the money and the levers of power in the government, business, and the media, and that makes them a most formidable opponent.  This really is a David and Goliath situation, and it would take a similar miracle to the one in the Old Testament to slay this giant.

But anyway, Matt Taibbi has a good column in Rolling Stone about getting some specific demands out there that people can rally around:


But the time is rapidly approaching when the movement is going to have to offer concrete solutions to the problems posed by Wall Street. To do that, it will need a short but powerful list of demands. There are thousands one could make, but I'd suggest focusing on five:

1. Break up the monopolies. The so-called "Too Big to Fail" financial companies – now sometimes called by the more accurate term "Systemically Dangerous Institutions" – are a direct threat to national security. They are above the law and above market consequence, making them more dangerous and unaccountable than a thousand mafias combined. There are about 20 such firms in America, and they need to be dismantled; a good start would be to repeal the Gramm-Leach-Bliley Act and mandate the separation of insurance companies, investment banks and commercial banks.

2. Pay for your own bailouts. A tax of 0.1 percent on all trades of stocks and bonds and a 0.01 percent tax on all trades of derivatives would generate enough revenue to pay us back for the bailouts, and still have plenty left over to fight the deficits the banks claim to be so worried about. It would also deter the endless chase for instant profits through computerized insider-trading schemes like High Frequency Trading, and force Wall Street to go back to the job it's supposed to be doing, i.e., making sober investments in job-creating businesses and watching them grow.

3. No public money for private lobbying. A company that receives a public bailout should not be allowed to use the taxpayer's own money to lobby against him. You can either suck on the public teat or influence the next presidential race, but you can't do both. Butt out for once and let the people choose the next president and Congress.

4. Tax hedge-fund gamblers. For starters, we need an immediate repeal of the preposterous and indefensible carried-interest tax break, which allows hedge-fund titans like Stevie Cohen and John Paulson to pay taxes of only 15 percent on their billions in gambling income, while ordinary Americans pay twice that for teaching kids and putting out fires. I defy any politician to stand up and defend that loophole during an election year.

5. Change the way bankers get paid. We need new laws preventing Wall Street executives from getting bonuses upfront for deals that might blow up in all of our faces later. It should be: You make a deal today, you get company stock you can redeem two or three years from now. That forces everyone to be invested in his own company's long-term health – no more Joe Cassanos pocketing multimillion-dollar bonuses for destroying the AIGs of the world.

Posted by Carl Lindquist at 8:42 AM