There is something disturbing about Mormonism.  And it has nothing to do with whether or not it is Christian. 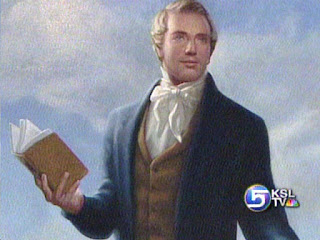 (My personal answer to that issue is: No, Mormonism should not be considered as a Christian denomination.  It is just too far outside the circle of what makes Christianity Christian, viz. the Bible and basic biblical Trinitarian theology.  Rather, LDS (The Church of Jesus Christ of Latter Day Saints) is, as Indiana University historian Jan Shipps put it in her 1987 book Mormonism: The Story of a New Religious Tradition, a brand new religion in history that precipitated out of 19th Century American Protestanism.)

Mormonism has a destructive virus embedded in its code that should logically end up destroying it.   And that is that the central focus of its faith, the hinge on which it swings, is not Jesus Christ but Joseph Smith.  To put it another way, the credibility of Mormonism rises and falls almost solely on the credibility of Joseph Smith and his revelations as found in The Book of Mormon, the Doctrine and Covenants, and the Pearl of Great Price.  Take away Joseph Smith, and Mormonism loses its very soul, its raison d'être.

Houston, we have a problem.

And here it is: unlike the founders of any of the great world religions including Christianity, we know a great deal about Joseph Smith, because he lived in 19th century upstate New York (not 1st century CE Palestine or 6th century BCE India).  There were newspapers, magazines, libraries, courts, diaries and journals, and all kinds of written sources all around him there, and many of them have been preserved.  We know a great deal about Smith, his father and mother, his wife Emma, his extended relatives, his neighbors, his community, and his eventual Mormon followers.

So, whereas the Mormon Church has created over the last 180 years a mythologized, idealized, "faith-promoting" picture of its "prophet, seer and revelator" Joseph Smith, we now have an alternative, historically-grounded, factually accurate account of his life.  And the two don't match.  At all.

Disinterested scholars of Mormonism and Joseph Smith--many of them ex-Mormons in fact, like biographer Fawn Brodie and historian D. Michael Quinn--have discovered that this young man was not really a saint or mystic or prophet at all.  Indeed, far from it.

Frankly, I did not necessarily expect this when I started reading in the literature.  As a rule, I tend to give the founders of religion--prophets, saints, mystics, etc--the benefit of the doubt, believing that at the core of their mission was a good heart and an intense desire to get close to God--however they conceived God--and to do God's will, as they understood it.

This isn't what I have found with Joseph Smith.  In fact, it looks to me, to put it bluntly, that he was either an imposter or a deluded zealot from the very beginning of his role in the founding of Mormonism.

For example, years before he 'translated' the Book of Mormon or organized his new church, between the ages of 18 and 25, it is now clear that he was heavily involved in the 'folk magic' that was rampant in that area at that time.  (This is the essence of Quinn's book Early Mormonism and the Magic Worldview, for which scholarship he was excommunicated by the LDS in 1993.)  It appears that Smith used these magical 'tools'--divining rods, incantations, magic circles, talismans, crystal gazing and 'seer stones', and the like--all as a means of treasure-hunting, ie. as a way of duping those around him into giving him money.  In fact, he was actually arrested and convicted for this activity during this time, historical evidence of which has been found in the last decade or two, much to the  extreme consternation of the Mormon Church.

It was also during this same time that he allegedly found the famous golden plates (using his magic) and 'translated' them (using, again, his magic--a crystal ball-type stone in a top hat into which he put his face) into what became his Book of Mormon, the new scripture of the people called Mormon.  And in 1830, in Palmyra, New York, this magic-saturated and obviously talented young man of 25 called his congregation together, believers in him and his new magic book.

Most disgusting of all is the now-verified serial adultery of Joseph Smith with teenage girls and the wives of his followers (33 of them, at least).  Blasphemously, he tried to justify his obscene behavior by claiming it to be God's command to him (though in his lifetime, he denied that publicly).  This so-called 'polygamy' or 'plural marriage'--aka fornicating with every woman he could manage to persuade with his gift of 'God-talk'--spread to the other Mormon leaders and soon became the basis for an entire Mormon way of life, which lasted into the 20th century.  (His successor as President of the Mormon Church, Brigham Young, had no less than 55 'wives', which, in its own way, is very impressive!)

Mormonism, because of its polygamous lifestyle, is the only religion that the US federal government, famous for its 'freedom of religion', has ever threatened to squash.  And that is the only reason that Mormonism outlawed its polygamy, officially in 1890 and in reality several decades later.

Unfortunately, history tells us quite clearly that it is very unlikely that Joseph Smith was who he said he was: the greatest of all prophets and the restorer of true Christianity.  No, he seems to have been the complete opposite.

I feel sorry for Mormons, I really do.  They are, on the whole, really nice, very good people.  Of that, there is little doubt.  It's just too bad they had such a screwed-up founder.
Posted by Carl Lindquist at 9:46 PM