Is the Problem with Mitt Romney his Mormon Faith?

So why can't Mitt Romney seem to get any traction in the Republican Party Presidential race?  He's been first or second in all the polls since the current election cycle began months ago, and he's clearly been the best performer in the debates that have taken place so far.  Yet one challenger after another comes along and rises in the polls to equal or surpass him (Michelle Bachmann, Rick Perry, Chris Christie, and currently pizza impresario Herman Cain).  These challengers rise and fall like a merry go round, yet he stays at his plateaued level of anywhere from 20-30% of the Republican electorate. 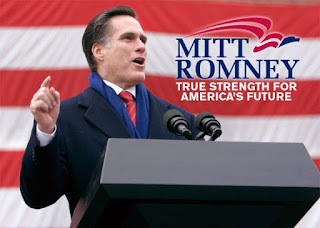 Rachel Maddow suggested on one of her shows that all the other candidates personally despise Romney, that he was an outsider and pariah in their midst.  She didn't really suggest why that was the case, so it's still a big mystery.  Is it his personality?  Is it his behavior?  Does he not fit in with 'the good ole' boy' network of politics?  Is he seen as a sissy, a prude, a loner who can't communicate with other pols?  What the hell is it?!

I would like to see a good analysis of this question by someone on the inside, but so far, they're not saying.  My guess is that they know but won't say.

Which leads me to say, in lieu of other reasonable answers, that I think it's his religion.  Mitt Romney is a orthodox, traditional Mormon, a member of the Church of Jesus Christ of Latter Day Saints.  His father and mother (George and Lenore Romney) were Mormons, his grandparents were Mormons, his great-grandparents were Mormons (and some of them were polygamous Mormons--the real, old-fashioned kind that most Americans used to hate and find despicable, the kind that were--literally--outlawed by the federal government in the late 1800s).

And while everyone seems to want to tamp down and suppress any discussion of this '500 pound gorilla in the room', (e.g. see this column by Kathleen Parker in the Washington Post), I think it's worth discussing in a straight-forward way.  The fact of the matter is that most Americans know almost nothing about Mormonism.  I know I didn't until a few years ago, and as a Methodist pastor and student of religion (both academically and personally) for most of my life, if I didn't know about it, I'm pretty sure most people know much less.

I did research on Mormonism a few years ago when I was teaching a class in my church on what I called 'Peculiar American Religions', and that was an eye-opening experience.  So let me share some of what I learned in some posts here, which I'll be writing and sharing over the next week or so.  And let me confess that this is not an easy task.  Mormonism is very complicated, very obscure, and very controversial, so I'm biting off a big assignment here.

Hopefully, this will all be enlightening and helpful for you, dear readers.  I will certainly try to be 'fair and balanced', and I don't mean that like Fox News says it.  I really mean it.  I have no interest in demonizing Mormonism or Mitt Romney.  But it's not enough to say, like Kathleen Parker did in her column, that it's 'unAmerican' to require a religious test (which of course is true).

While politicians should be judged primarily on the basis of their character, their competence, and their policy positions, their religion does in fact play a role in their acceptance (or not) by the American electorate.  For example, I think we can all agree, that if a politican were an avowed atheist, it is unlikely that s/he would have much chance of being elected President in America, no matter what their character, competence, or policies!  On the other hand, the more 'religious' a President is, even if it turns out to be mostly for show (like the Reagans, who virtually never went to church and who at times consulted with an astrologer), the more likely it is that s/he will attract enough votes to win.

Likewise, it is unlikely that a (truly) pacifist Quaker or Amish would be able to win the Presidency, and I don't think I even need to explain that.  Neither would a non-Pledge-of-Allegience-saying Jehovah's Witness., for again obvious reasons.  Yes, Catholics, Protestants, and even Jews (though one of those has not yet been elected President) are probably beyond question these days.  But there are many splinter American religions whose adherents would raise questions and doubts in the American electorate.  And I think it is very possible that Mormonism is one of those religions.

So it's worth looking at.  Stay tuned.
Posted by Carl Lindquist at 9:37 AM