If Nothing Else, Mitt Romney Is Passionate About Becoming President

Here's some good stuff about Mitt Romney from an article in the New York Review of Books by Christopher Benfey. 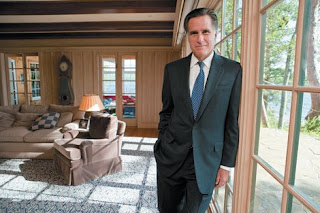 Then I ask locals about their impressions of Mitt, I get a recurring response: Nixonian. “The overriding passion of his life seems to be to become president,” a conservative economics professor tells me. “I can’t think of a single issue over which Romney would risk reelection in order to stick to a principle.” A University of Massachusetts journalism professor puts it more positively: “He can be as cagey as Nixon, and he can be almost as smarmy, but he is also able to think strategically.”

It’s a point of pride in the college towns of Amherst and Northampton and South Hadley not to watch, or at least admit you watch, the Republican debates, which are nonetheless characterized as “scary.” Concern is voiced at local dinner parties that Mitt is a Mormon, though it quickly becomes clear, amid loose talk of magic underwear and scriptures in “reformed Egyptian,” that few of us really know much about Mormonism. One friend whispers darkly that “a disproportionately large share of the faculty of the Harvard Business School is Mormon.” A quick Google check reveals that the longtime dean, Kim Clark, is indeed a Mormon, but what number would be disproportionately large?

There’s also mild embarrassment at what might seem religious bigotry among us, a point reinforced by Mitt himself in his careful “Faith in America” speech from 2007, when he pointed out that fifty years ago “another candidate from Massachusetts explained that he was an American running for president, not a Catholic running for president.” I myself grew up in a sect (the same one that Nixon belonged to) as peculiar in its tenets as the Mormons, and with a longer history of persecution, though few people since Benjamin Franklin have feared that a cabal of Quakers is running the country.

Mitt’s favorite movie is said to be the Coen brothers’ O Brother, Where Art Thou? Mitt, who majored in English at BYU, may imagine some connection between the picaresque hero of this Odyssey-inspired romp through the American South, a charming escape artist played by George Clooney, and his own shape-shifting career. When contemplating yet another change of direction with his aides, according to Ashley Parker in The New York Times, Mitt likes to quote Clooney’s line “We’re in a tight spot.”

On television, Mitt looks like someone hired to play the president in a movie that couldn’t afford Clooney. At the recent debate in Orlando, he joined a lineup of eight other candidates, all of whom seemed to be conspiring to make Mitt look and sound presidential. Pizza executive Herman (“9-9-9”) Cain was the favorite choice for vice-president, the appealing black man who proves that Republicans aren’t racists for going after Obama, whom Rick Santorum compared to George III....

Like the other Republican candidates, he has an aversion to Europe (and a professed love for Israel, a fervent cause for evangelicals, who worry about his Mormonism). Obama “takes his political inspiration from Europe and from the socialist democrats in Europe,” he said in Orlando. Romney spent two years in France during the late 1960s, peddling Mormonism door to door, as is expected of young members of the church, while disapproving of the student uprisings in May 1968. Not only is Europe bankrupt financially, Romney likes to argue, it’s bankrupt spiritually. “I have visited many of the magnificent cathedrals in Europe,” he said in his faith speech. “They are so inspired, so grand, so empty.” In a debate devoted to the economy held at Dartmouth on October 11, Mitt dismissed as “hypothetical” a question about what he’d do if the European financial contagion spread to the US, implying that no one should expect a bailout from a tough businessman like him. Religion didn’t come up at Dartmouth (except for Michele Bachmann’s joke about turning 9-9-9 upside down), and Mitt was free to portray himself as a “job- creator” who knows how to turn a country around.

Posted by Carl Lindquist at 5:22 PM