Salon.com has an insightful article about Herman Cain's relationship with Big Tobacco, which most certainly explains the guy smoking in his recent Presidential ad.  Absolutely NOTHING in those political ads is coincidental.

So, Cain may not know what a 'neo-conservative' is, but he seems to know the difference between Winston and Salem. 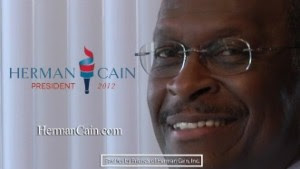 Who would have guessed that even the stake to the heart of the tobacco industry would be at-risk of being removed in our rightward surge? And yet, there he is: Herman Cain, lackey to Big Tobacco, standing poised and ready to help out his old cronies, the people who made him, under the guise of removing excessive government regulation.

An in-depth article in Sunday’s New York Times, “Cain, Now Running as a Political Insider, Went to Washington as a Lobbyist,”got the ball rolling, and thinkprogress.org has dug a little deeper, but neither do more than scratch the surface of the 156 references to Herman Cain contained in the University of California at San Francisco Legacy Tobacco Documents Library.

Cain’s tobacco era began when he took over as CEO and executive lobbyist for the National Restaurant Association (the other NRA). Cain developed a money trail that culminated in contributions from R.J. Reynolds alone at a level of many hundreds of thousands of dollars in in-kind benefits to the NRA. This was stated clearly by Rob Meyne, former senior director of public affairs for the tobacco company. He wrote in a 1999 memo published by the Times that indicated R. J. Reynolds gave the National Restaurant Association “nearly $100,000 in cash and much more in in-kind support” on a more or less annual basis. One wonders what forms that in-kind support took, and how such support may have buoyed Mr. Cain’s premature foray into presidential politics in 2000.

Posted by Carl Lindquist at 2:23 PM