Archie, The Kids Are Getting Rowdy Again

For some reason, when I see video clips of the Occupy rallies on TV,  the image of Archie Bunker and his son-in-law Meathead comes to mind.  I think we may be back in the 60s again. 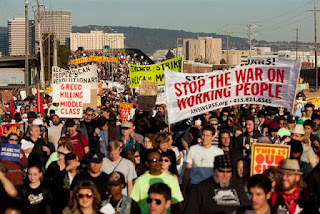 I don't think the Occupy/99% Movement is going away any time soon. And that's because there's such paralysis in our political/economic system these days, that the current problems people are suffering from--few jobs, house mortgages 'underwater', huge student loans, increasing national income/wealth inequality, a Democratic President who doesn't really seem to be addressing the issues that Occupy cares about, along with a completely obstructionist and out-of-touch Republican Party--are going to be around for a long time to come.

This new national social movement feels to me like the mid-60s, when the anti-war movement in America began to ferment and grow.  And oddly enough, the Democratic Party is in the same position as it was back then--unable to really support the movement because it's mired in the status quo.  Back then, it was Lyndon Johnson's escalation of the Vietnam War, today it is Barack Obama's inability/unwillingness to really take on the Wall Street scoundrels or resolve some of the fundamental economic problems.

Where this is all going specifically is very hard to say.  What new populist forms the Movement will take is difficult to predict.  But from what I've been seeing the last week or so, I can imagine that some of the bankers are starting to get very nervous.  (Protesters have been tracking the movements of JPMorgan Chase's Jamie Dimon, for example.)  Shades of mobs with pitchfolks in the French Revolution.

Whether all this will help or hurt Barack Obama is an open question, I think.  There is a lot of resentment about his unwillingness to take on Wall Street in any substantive way, and this could easily lead to a fall off in electoral support next year, or even support for some independent candidate for President.  (Which sure isn't going to be NYC Mayor Bloomberg after some of the things he's said and done recently!)