Giving Thanks For Our Many Blessings

Thanksgiving is a good day to just shut out the bad news of the world and only focus on positive things.  So this article by Fareed Zakaria is an appropiate read today. 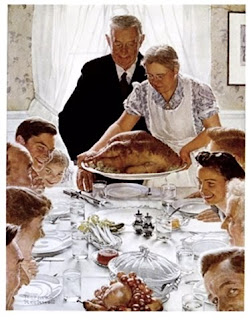 This might seem a tough time to celebrate Thanksgiving. The national mood is pessimistic. The economy continues to limp along. The failure of the supercommittee has come to symbolize the breakdown of not just governance but democratic politics. Yet there are reasons to be cheerful about the United States this week.

The United States continues to have the most dynamic economy in the developed world. We are enamored of Germany for having maintained its manufacturing base through timely reforms. That’s good, and we could learn a lot from other countries. But let’s note that Germany’s great companies are products of the second industrial revolution — from the early 20th century — clustering around cars, chemicals and machine tools. Germany has one notable company in the information economy, SAP. The post-industrial, information economy is dominated by the United States. The industries of the future, from biotechnology to nanotechnology, are dominated by the United States. The best research centers, universities and companies remain American.

We also have the most dynamic society in the developed world. While Japan has entered and Italy and Germany are approaching a demographic death spiral, the United States remains young, vibrant and active. Demographics is not destiny, but it helps mightily to have a growing society, with a healthy share of young workers — who are also taxpayers. This country still attracts the most immigrants and most investment in the world.

The United States has gone through a big bust, which has cast a long shadow on its economy. But to put it in perspective, it is not nearly as bad as the one that crippled Japan almost two decades ago....

What about our political dysfunctions? These are real, but things are changing. Over the past two years we’ve seen political leadership from both parties at the state and local level. Governors such as Andrew Cuomo, Chris Christie and Jerry Brown are tackling deeply entrenched problems, such as pension shortfalls, that threaten to destroy state budgets. A groundswell for deeper political reform has also begun to grow....

Structural reform is crucial. We need sensible solutions to the problems of growth and deficits. But these exist. Simpson-Bowles and other commissions have already shown the way to lower deficits. The larger challenge is structural reforms to stop small minorities from blocking reform. We need to highlight the corrupt ways that Washington works — with Senate filibusters, secret and arbitrary holds and a broken budget process — and create a much more streamlined structure of governance for the 21st century.

The United States has problems. But unlike many other countries, it also has solutions. And since politicians won’t, citizens are increasingly finding ways to propose these solutions. That’s something to be thankful for — and hopeful about.

Thanks, Fareed.  Happy Thanksgiving!!
Posted by Carl Lindquist at 2:30 PM