Elizabeth Economy, Asia expert at the Council on Foreign Relations, writes in the Atlantic today along the lines of my two recent posts on Obama's new Asia policy: 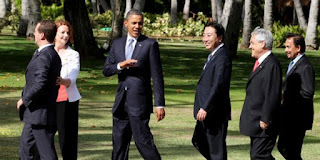 For many observers, President Obama's trip represents a "return to Asia." The truth is that the United States never left Asia; it was just focused elsewhere in the region. Mostly, Washington was busy banging its head against the wall trying to find ways to work constructively with China (translation: get the Chinese to change their economic, political, and security policies) and to persuade North Korea to step back from the nuclear brink. Suffice it to say that neither effort yielded a significant return. The president and his team have now realized that it is much more substantively productive and politically profitable to spend time with people whose overall political values, economic practices, and strategic interests are generally aligned with those of the United States--namely all the important players in the region except for China.

Beijing's reaction to President Obama's initiatives in the region, unsurprisingly, has been one of deep unhappiness. In conversations I had with Chinese officials last week in Beijing, it was clear that they believed the United States was 1) done with the Middle East and now turning its focus to the Asia Pacific in an effort to contain China, 2) stirring up trouble for China among otherwise friendly countries in the region, and 3) developing the "mysterious" TPP as an anti-China economic strategy. There was no official recognition that at the outset it was China's assertive behavior that created the circumstances in which the United States could play such an enhanced role in the region. Forgotten or ignored were Foreign Minister Yang Jiechi's comments at the 2010 ASEAN Regional Forum that "China is a big country and other countries are small countries, and that's just a fact"; the continued sparring between Chinese vessels and those of its neighbors in the East and South China Sea; and the general unattractive nationalist rhetoric of Beijing's official newspapers warning that if countries in Asia "don't want to change their ways" they will need to "prepare for the sound of cannons."

In some respects, Washington has done little more than to take advantage of Beijing's missteps.

The beautiful thing about this is that Obama hasn't had to do any hawkish posturing or 'tough talk' or neo-con style China bashing.   All he has to do is start working cooperatively and proactively with all the American allies in the region, and China suddenly feels threatened.

I think we're beginning to see a President who is looking more confident about and comfortable in his international role.  You know, maybe Obama is finally beginning to earn that Nobel Peace Prize he was awarded a few years ago.

I just hope that our pathetic--and possibly worsening--economy doesn't ruin all of this.
Posted by Carl Lindquist at 8:24 PM