Jeb Bush Waiting in the Wings?

The Republican Party is in complete shambles as I write.

The candidacy of Herman Cain is collapsing, though the Tea Party/Religious Right conservatives who support him don't seem to know that yet. 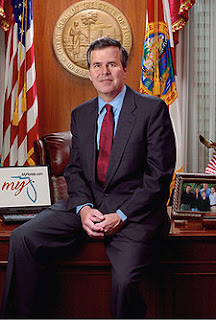 Rick Perry, with his Friday night stand-up routine in New Hampshire that has gone viral, has gone from being stupid to being just very strange.

Mitt Romney is still trailing Herman Cain in the polls, and that says all you need to know about his popularity among Republicans.

And Newt Gingrich, Ron Paul, Rick Santorum, and Michelle Bachman aren't going anywhere because of their obvious deficiencies.  Other popular Republicans Chris Christie, Mitch Daniels, etc. all have their reasons for not running.

The only truly obvious (to me anyhow) Republican candidate in the race--Jon Huntsman--seems to be disliked by all Republicans across the board, for some reason.

So who's left?  As I wrote on this blog a year ago:


Jeb Bush is being readied behind the scenes to come forth as a strong, consensus candidate (at least among the anti-Palin forces) for the Republican nomination, because there is no one else who is obvious to make the run. George W. Bush's recent attempts to redeem his reputation vis-a-vis his book tour is a part of that effort. Making this even more likely is the fact that there have been surveys showing Bush doing well in a favorability poll against Obama. This again breaks down the resistance to another Bush Presidency, the one that George H. W. Bush wanted in the first place, Jeb being the more thoughtful and sophisticated son.

Is it plausible that this could still happen?   I don't know.  (But his name was mentioned again on MSNBC's 'Morning Joe'.)  I  agree that it seems unlikely.  I'm not even sure that it is still possible logistically/legally.  But believe me, Poppy Bush would still like to see his son Jeb in the White House, that we know.  And Poppy is still alive and kicking, not to speak of the Bush who really wears the pants in the family, ie. Barbara Bush.

So, don't count Jeb out yet.
Posted by Carl Lindquist at 9:28 AM