In the mudwrestling contest called the Republican Nomination Process, it's looking more and more like, when it's all said and done, there will be two guys left standing . Two guys who don't have some major, disqualifying flaw and who, when you hear them talk and see them on the TV screen, look and sound like they could be President. 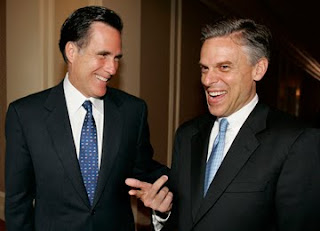 And, oddly enough, those two guys are both Mormons.

Which brings me to my major point in this post:  Mormonism is as American as mom and apple pie.

Believe me, I wouldn't have put it this way two weeks ago, when I started my intensive research project into the Mormon religion. Given that it's a live possibility that we could for the first time wind up as of November, 2012, with a Mormon as President of the United States, I thought that I would, once and for all, figure out what makes Mormonism 'tick'.

As a professional clergyman of the Methodist persuasion, I have studied and analyzed religious issues with deep interest and curiosity for over 40 years now, including nine years of formal undergraduate and graduate school.  And yet, Mormonism was not one of those topics that I could say that I adequately understood (to the extent that you can say that about anything you are not personally involved with).

A pile of books and hundreds of internet pages later, now I do.

I know that sounds strange, given how alien and strange the Mormon faith seem to so many of us, with its sacred undergarments, its polygamy, etc., but it's true.  I'll try to demonstrate that here--as well as try to convey the essence of Mormonism--over the course of future posts on the Mormon faith.
Posted by Carl Lindquist at 9:55 AM