SNL in Michigan: The Republican Debate

Except for another stellar performance by Mitt Romney, last night's Republican debate could have been a Saturday Night Live skit.  Unfortunately, these are people who want to be President of the United States  (The funniest moment was probably watching Jim Cramer trying to get Herman Cain to talk about something other than 9-9-9.) 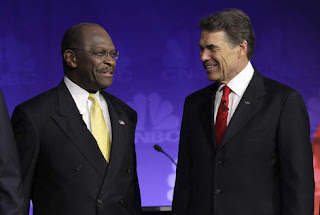 Rick Perry is turning out to be the Forrest Gump of the Republican primary season.  More than anyone, when he entered the race, he looked like the frontrunner and a viable opponent of Barack Obama.  Remember?  People were saying last summer that he looked like a President, had governed one of the largest states, was raising lots of money.  Instead it turns out that he's just dumb.  He has actually incarnated Forrest Gump's motto: "Stupid is as stupid does."

Herman Cain.  Dear God in heaven.  What we have here is a businessman with no governing experience, who doesn't know anything about foreign policy, whose only answer to every question about our economic crisis is to robotically repeat '9-9-9'.  And now we have multiple woman--along with other witnesses--claiming that he is guilty of sexual harrassment.  Shades of Bill Clinton.  And he is the candidate leading in the polls?  What are the Republicans thinking?

I have made the case here and here that Mitt Romney is underappreciated by both the media and the Republican Party.  He is not as inconsistent as he's sometimes made out to be (except perhaps on the abortion issue).  His philosophy of 'pragmatic conservatism' does allow him to follow the actual evidence on issues a bit more than some of the ideologues in the race, so that compared to them, he just seems more flexible.  Which of course in this very ideological age is frowned upon as some kind of heresy against the religion of Conservatism.

Mitt Romney has performed well in every debate, with only one minor slip-up a debate or two ago, where he got a bit flustered when trying to deal with Rick Perry's charges of hiring illegal aliens to cut his cross (it was not so much the issue as Perry's interrupting his explanation).  He appears and sounds Presidential.  So what's the problem?

It could be his perceived moderation, as a born and bred Midwestern Yankee, and former governor of Massachusetts.  With the heart of the Republican Party's conservative base  in the West and the South, that could easily be it.  Yet at some point, if this keeps up, the conservative base will have to realize that it's either Mitt or Barack.  And they will choose Mitt.

Or it could be his Mormonism.  Given the power of the Religious Right in the Party, with their anti-Mormon views, this could be a significant factor.  Yet what can he do to alleviate their fears?

A few posts ago, I quoted someone to the effect that Romney has a Nixonian quality about him.  The more I study him, the more I think that's true.  Quirky personality, uncomfortable in public, unusual religion (Mormon vs. Quaker), moderate in ideology, pragmatic, very smart, never really popular but seen as 'heir apparent' because he been around and earned it.

Update: Andrew Sullivan's comment as he live-blogged the debate:


At this point, I have begun to really lose it watching this crew. There are only two faintly plausible, credible presidents up there, both Mormons. The rest is beyond an embarrassment, and at this moment in history, the sheer paucity of that talent is alarming.

Posted by Carl Lindquist at 8:44 AM