News that will be overlooked by many is that President Obama is in Australia, signing a new basing agreement with the Aussies. 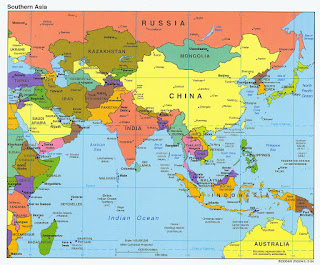 President Obama and Prime Minister Julia Gillard of Australia announced plans on Wednesday for the first sustained American military presence in Australia, a relatively small deployment that is still a major symbol of American intentions to use regional alliances to counterbalance a rising China.

Since World War II, the United States has had military bases and much larger forces in Japan and South Korea, in the north Pacific, but the arrangement with Australia will put an American footprint closer to the southern reaches of the South China Sea. The sea, a major commercial route — including for American exports — has been roiled by China’s aggressive claims of control.

Like Australia, China’s neighbors in Southeast Asia have looked to the United States to increase its military presence as a counterweight to Beijing. Mr. Obama has sought to provide that assurance, but the Asia-Pacific allies are well aware of the intense pressure for budget-cutting in Washington, and fear that squeezed military spending and other factors may inhibit Mr. Obama’s ability to follow through.

The United States and other Pacific Rim nations are also negotiating for a free-trade bloc that does not include China, the Trans-Pacific Partnership. The tentative trade agreement was a topic over the weekend in Honolulu, where Mr. Obama hosted the annual Asia-Pacific Economic Cooperation forum, and it will be discussed again later this week when he becomes the first American president to participate in the East Asia Summit, on Indonesia’s island of Bali.

For China, the week’s developments could suggest both an economic and military encirclement. For the United States and its Pacific Rim allies, they suggest a growing concern over China’s muscle.

This may not look very important, but it is a small piece in a much larger strategic mosaic being crafted by this Nixonian president of ours.  Forty years ago, Richard Nixon and Henry Kissinger laid the foundation for a detente with our Cold War enemies, the Soviet Union and Red China, mostly behind the scenes and in a very stealthy way.

In a similar fashion, beneath the radar of the American public, Obama is quietly but carefully laying the foundation for a new strategy to counter the growing global influence of China.

This is at least in part what was going on in Libya.  China had been working with Gaddafi to develop their oil fields, and most of those Chinese left when the Libyan rebellion started.  Likewise, our increasingly involvement recently in Africa is in great part an attempt to block or match Chinese involvement in that continent.

Now with the Asia-Pacific region, Obama is reassuring our Asian allies--the Japanese, the Koreans, the Taiwanese, the Philippines, etc.--that we aren't going anywhere, and that while China may be a growing regional power, they aren't going to totally dominate Asia anytime soon, if we have anything to say about it.

This is Obama the practitioner of Realpolitik, the successor to Franklin Roosevelt, JFK, and Richard Nixon. I believe this is what Obama likes best. He doesn't much care for the economics stuff, he really dislikes the political aspect of the job, and, truth be told, there is very little of the populist in him.

But moving the pieces around the global chessboard, and doing it for real aboard Air Force One in his leather flight jacket?  Now that is fun, and makes the rest of his job worth doing.

Unfortunately, it may not be enough to get him reelected, since most Americans don't give a rat's behind about foreign policy.  All they want are jobs, jobs, jobs.
Posted by Carl Lindquist at 2:22 PM