Michael Tomasky, columnist for The Daily Beast, puts his finger on the problem with the current Republican Party. 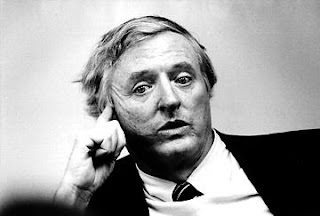 And it's not that it's too conservative.  Bill Buckley was conservative, he's the father of American Conservatism, really. But I doubt that current Republicans would like Firing Line, or even know what it was.  Too complicated, too tactful, too thoughtful, you know.

There's a almost robotic feel to this Republican Party.  There is a mantra that must be repeated, with no exceptions allowed.  "Low taxes. No regulation. Cut spending. Death to the EPA. Build a fence. Build a higher fence. Build an electric fence."

It's why someone as conservative as Jon Huntsman can't seem to get any leverage.


I hope we all agree now, even those of you on the Koch brothers’ payroll, that the current crop of Republican candidates leaves a bit to be desired. This week Joe Klein came up with “the Republican Romper Room,” which is about as apt as anything I’ve seen. What I haven’t seen yet is a theory of why they’re so lame. So here it is: they’re lousy candidates with no ideas because they’re in a party that doesn’t care about ideas. Indeed, actual ideas about actually solving the country’s actual problems would constitute sedition in today’s GOP. Fortunately for the candidates, none of them are in remote danger of being hauled before the bench.

Say what you will about Barack Obama, Hillary Clinton, and yeah, even John Edwards, before we’d grasped the full depths of his creepitude. They knew stuff. They and the other Democrats went after one another in debate after debate after debate about the arcana of questions like whether an individual mandate was the right way to go and what kind of cap-and-trade system would work best. Sure, they did their pandering, a lot of it. Newsflash: they’re politicians. But they dug into the details, and their audiences expected them to be conversant in details.

No such danger this time around. All these candidates have to do is speak in billboards. Low taxes. No regulation. Cut spending. Death to the EPA. Build a fence. Build a higher fence. Build an electric fence. Stop apologizing for America. The audiences have been, as we’ve seen, worse than the candidates, boors and jackals and garment-rending vulgarians, booing a soldier in Iraq, cheering lustily at Rick Perry’s death-row body count, shouting “let him die!” about the poor hypothetical fellow with no health coverage.

There used to be such a thing as conservative policies. They included... well, for starters, they included the individual mandate and cap-and-trade. Those were once Republican ideas. But even beyond that, conservatism used to be amenable to talking rationally about immigration, poverty programs, even taxes. Now these things cannot be spoken of. Just repeat the slogan. And if the other guy beat you to it, just repeat it again, at greater volume and with a lacerating adjective or two.

This is true not only at the presidential level. I’ve lately begun looking into the positions, although it does them far too much honor even to call them that, of some of the GOP candidates running for Senate. They are, if such is possible, stupider. Even the ones who aren’t stupid are turning somersaults to reassure voters thay can become stupid.

At least one of them, Mitt Romney, surely knows all the above but is relentless (if awkward) in his exertions to make himself seem just as opposed to thought as the rest. Another, Newt Gingrich, is smarter than this, but he has his own iffy past to live down (making a video with Nancy Pelosi about the dangers of global warming). The rest of them genuinely appear to believe that billboards can solve complicated problems.

Except Rick Santorum. I’ve spent weeks wondering why he doesn’t get his 15 minutes. He’s as conservative as you please on both economics and culture. He ought to pass muster with the neocons as well. And he actually knows a thing or two about policy and things like the budget. I encountered him once at (and this might kill him, not that he isn’t close to dead anyway) a seminar at the Brookings Institution. But now I realize: It is precisely the fact that he knows a thing or two about policy and the budget that prevents him from making any headway. He sounds, to the garment-renders, far too serious. Knows too much. Fishy. Goes to Brookings seminars.

Yes, the field is lame. And the problem is not individual shortcomings of these particular candidates. The problem is the party they’re in, and what they have to do, say, and stand for to have a chance to become its nominee. This fish rots from the tail up.

Posted by Carl Lindquist at 1:43 PM