Evil Triumphs When Good Men Do Nothing

Yes, why didn't this Mike McQueary go over and give Jerry Sandusky a quick blow to the head to save the little 10 year old boy being assaulted by this sexual predator?  Where was the courage and the nobility when it was needed?  McQueary needs to go too, it would seem.  There are lessons in morality, courage, and the kind of society we are that need to be learned from this.

Even though the signs were there in 1998, no one stopped him [Coach Jerry Sandusky]. But in 2002, when grad assistant Mike McQueary allegedly walked in on that horrible scene in the showers, on campus, right there it could have stopped. That child, and every child that came after, could have been saved. I don’t care whether Sandusky never came back to the campus showers again. That doesn’t mean he stopped. Predators do not stop.

Instead, McQueary left and called . . . his dad. McQueary was not a child, or an 18-year-old freshman. He was a 28-year-old, presumably of good health and strong build. Yet he walked away? When I was 28, I probably still called my dad if I had a perplexing question about my tax return, but if I saw a naked man raping a young boy in the showers, I would have dialed 9-1-1, pulled the man off the boy, incapacitated the man with a well-placed and much-enjoyed knee to the groin, and gotten the boy out of there.

Isn’t that what anyone in his right mind would do if he saw someone being raped? I certainly hope our world hasn’t fallen so far into the Slough of Despond that seeing forcible sex acts performed on a child isn’t something we shrug off. This is the sort of thing for which 911 was invented.

But for whatever reason, McQueary didn’t do those things, nor did his father call 9-1-1. Opportunity No. 2, wasted. Instead, they went to see Paterno the next day. Again, no phone call. Goodbye, Opportunity No. 3. And Paterno’s report up the chain of command was so unlike what the grand jury report says McQueary described to athletic director TIm Curley and vice president Gray Schultz that it was like a bad game of Telephone. According to the grand jury report, Paterno described what McQueary told him as Sandusky “fondling or doing something of a sexual nature to a young boy.” The same report says McQueary described it to Curley and Schultz as “anal sex.” Maybe Paterno didn’t believe it; maybe McQueary wasn’t clear.

And that’s why Paterno is gone. Yes, yes, he followed the chain of command and reported the incident to his superior, as did McQueary, so he followed the rules. McQueary was later told, according to the report, that Sandusky’s locker room keys had been taken and the incident had been reported to Second Mile. This was Opportunity No. 4, in my opinion, because this was McQueary’s chance to make the call. It was clear no one had contacted anyone with actual authority. Might McQueary have lost his job? Yes. Is letting a child be raped and doing nothing worth a line on your réesumeé? I would say no. Wouldn’t you?

Evil flourishes when good men do nothing. And at Penn State, a lot of men — good or not — did nothing when one of the greatest evils imaginable was perpetrated against some of the most defenseless among us. 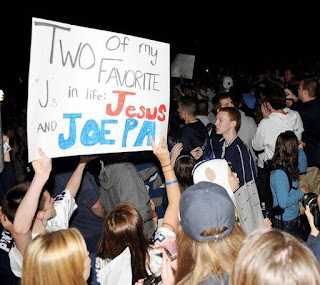 If you want to understand the cult of Joe Paterno's role in allowing a ten-year-old to be raped and his rapist never brought to justice, look at the scenes last night, as students rioted in defense of their demi-God. Winning football games morally trumps allowing a brutal child rapist to avoid criminal charges and go on to rape many more. There is no "due diligence" with respect to protecting kids from rapists. There is simply stopping them, and bringing them to justice immediately.

That the structure of Penn State - and its creepy Paterno worship - allowed this to happen is bad enough. That the student body would rather side with a negligent football coach over a raped child is beyond belief.


Does anyone not see the extraordinary ironies and parallels here? Yes, this is a classic "father" figure, like a priest or bishop or Pope. The man is even called "Paterno". And what Paterno did is what the current Pontiff did when he was an archbishop in Munich, where he was told of a priest under his jurisdiction who had raped children. He didn't alert the police; he merely sent the rapist on to a psychiatrist and the man went on to rape many more children.And we might as well face it: college football is a kind of religion for many. Challenging the Pope of Penn State was unthinkable.

I regard the current actual Pope as an accessory to child-rape, as I do Paterno. But their paternal authority within religious institutions allowed them to carry on. And this is another thing one can say about this profoundly fucked up culture of abuse: once condoned or treated lightly, the abuses often get worse and worse. I am not surprised that prescient Mark Madden is now hearing rumors that Sandusky was "pimping out young boys to rich donors." Pedophiles find each other.

All they need is for good people to look the other way. And a cult of authority that never challenges the father figure.