The Trials and Tribulations of Herman Cain

Herman Cain has suddenly found himself in a mucky bog of trouble.  Rumors of sexual harrassment accusations from former employees and subsequent 'settlements' have surfaced, as they often do around this time of so many politicians' campaigns. 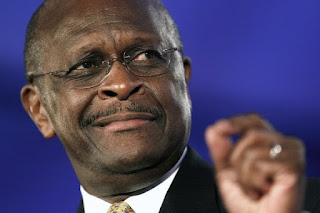 One wants to be skeptical about such accusations, but when you think back on all the recent scandals of this kind in Washington, how many of them proved to be false once they broke?  None of them, that I can recall.  In virtually every case, the politician indignantly protested his (they're almost all men) innocence, then was forced to admit that, yes, he actually had screwed that woman/sent that lewd picture/molested that intern.

In Herman Cain's case, he has, over the course of days, if not hours, changed his story, going from 'I have no knowledge of this' to 'Yes, there was an accusation' to 'I think the settlement may have been three months salary'.  What a farce. (And now, of course, we're going to meet his dear wife!)

To add insult to injury, it appears that Herman Cain has once again demonstrated his utter lack of knowledge of foreign policy.  This time on Public Television, he made it clear that he wasn't aware that China already had nuclear weapons.  Duh.....

This man Cain is pathetic.  Compared to this guy, Mitt Romney looks like a sheer genius, a virtuous knight in shining armor.

So, another Tea Party--Conservative Movement favorite bites the dust.  You would think they might begin to ask themselves: is the problem them, or is it us?
Posted by Carl Lindquist at 8:54 AM