Heaven Aboard the USS Carl Vinson

The UNC-Michigan State basketball game aboard the USS Carl Vinson was a classic melding of two greatly beloved American institutions: sports and the military. Add the automobile to it and you have the real American Trinity, the three gods before which we bow on a regular basis. 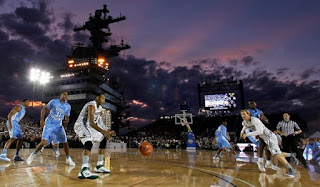 Sports, Military, and Cars.  Praise God from whom all blessings flow.

These three deities (and actually, I could have chosen a different set of three, like alcohol, sex, and gambling, but they're not as 'respectable') provide us Americans all the grace we need, at least for now. They keep us joyful when we've got the blues. They give us pride when we're being dissed by others. They provide us fellowship when we gather for worship. And when the stock market has had a bad day, we can turn on a worship service on ESPN or FOX and go to the Lord in prayer.

Few of us (except Mormons and some Southern Baptists) actually tithe our income to our church, but tithing to these American gods is no problem at all. We're happy to spend ten percent or more of our income on their upkeep. Think about it. Can you even imagine how much money it cost to stage that basketball game the other day? It boggles the mind. Just getting the Commander in Chief and his wife there on Air Force One probably cost more than I've paid in taxes my entire life. But fortunately, when it comes to our true religion, we will spare no expense.

Of course, the 'Holy of Holies' of our American religion is the annual Super Bowl. The football teams are the best America can produce, the F16s that fly overhead and the latest celebrity rendition of the National Anthem are awesome. And of course, the majority of the ads between plays are for the latest cars, virtually none of which I'll ever be able to afford. Americans gather in little congregations called 'Super Bowl Parties' to worship and have communion. And God forbid if any Christian church schedules an event that competes with the Super Bowl. Fahget about it! (Or instead, just do a Souper Bowl Party!)

The fact of the matter is that we're not going to cut the Defense budget, because it has become a part of our national religion. Just as the 'bridges and highways' for our cars are the things we'll spend tax money on to provide 'jobs, jobs, jobs', so too we need every single aircraft carrier we've got, even if it's only to provide a mobile floor on which to conduct our athletic worship. There is no doubt about it, aircraft carriers are cool and necessary.

And in closing, just to buttress my case here, I'm going to mention one of the great denominations of our national religion: the Penn State football program.  Let's just leave it at that.

It shouldn't need saying that things like sports, military, and cars have their proper place in life.  They certainly do.  But there is a point where they cross the line from normal to something more (or less).  And I think we've crossed that line.

Yes, truly, we Americans are a very religious people. It's just that we left behind those traditional religions like Protestantism, Catholicism, and Judaism a long time ago. This new American religion is just a whole lot more fun.
Posted by Carl Lindquist at 9:14 AM