Romney or Gingrich? Pick Your Poison 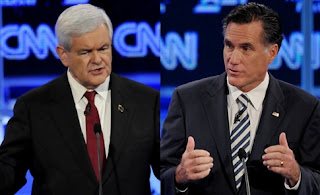 The two current Republican front-runners, Mitt Romney and Newt Gingrich, come from the same political territory — the land of at least minimal presidential credibility. Both are economic conservatives without being demolition-derby libertarians. Both are Reagan-inspired internationalists. Both have interesting records of ideological deviance — Romney on health care, Gingrich on the environment. Both display a knowledge of history and current events and the capacity to reason in public — attributes that can’t be assumed of all of the Republican field.

But for all these similarities, Romney and Gingrich are a study in contrasts. Seldom has a political choice been less ideological or more dramatic.

Romney is a politician of moderate virtues and moderate vices. He is steady, disciplined and capable — important, but not Churchillian, leadership qualities. Romney’s eagerness to please has left a trail of discarded policy positions — managing to displease true believers on all sides. While lacking scandalous personal vulnerabilities, he can also lack a human connection. This week Romney publicly confessed that he had “tasted a beer and tried a cigarette once, as a wayward teenager, and never did it again.” Americans might identify with Romney more if he had taken that second sip.

Gingrich possesses larger strengths and larger weaknesses — both of which have been on recent display. In debates and forums, he shines. Sometimes he also preens. His sense of historical urgency can be exhausting. Every political moment, it seems, is the most decisive since the Battle of El Alamein, or the rise of Kemal Ataturk, or the Lincoln-Douglas debates. It is not enough, for example, for the Congressional Budget Office to be wrong. Its bland, nonpartisan economists, according to Gingrich, are part of a “reactionary socialist institution.” He has perfected an unusual rhetorical method: provocation through exaggeration.

Successful presidential campaigns are exercises in endurance and discipline, which makes Gingrich unlikely to beat Romney in the end. But Gingrich unplugged can be impressive.