The Horrible Tragedy in State College

Penn State University is reeling this morning.  Former Assistant Defensive Coach Jerry Sandusky has been arrested and charged with sexual assault on young boys.  The Athletic Director and a University Vice-President have been charged with perjury.  The University Trustees have fired University President Spanier and Head Football Coach Joe Paterna.  All hell is breaking loose, with students rioting over the loss of their beloved Paterno. 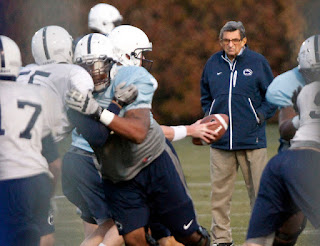 Obviously, outsiders like me don't know all the details of what happened, so I suppose we're not in a position to be making judgments.  However, one has to assume that the University Board of Trustees has good information on which to base their judgments about their university staff, and of course, they have to look out for the long-term well-being of the University, first and foremost.

It seems that people in the Penn State circle don't care too much what happens to anyone other than Joe Paterno, who is like a religious figure in State College, a football saint if you will.  His dismissal has riled a LOT of people up.

But, without knowing all the facts but taking what we do know so far at face value, it seems clear that Joe Paterno was in the 'chain of command' here but chose to look away when it became uncomfortable.  He was the Football Coach, Jerry Sandusky was his assistant, this was his football program.  It looks like he had the opportunity to check out this scandal early on and nip it in the bud, but he decided to look away and pass it along to those next up the ladder.

The Roman Catholic child sex abuse scandal would never have become so enormous and so devastating if the people-in-charge--the Bishops and the Catholic hierarchy--had done their job.  Instead, they looked away.  They covered up the crimes of their priests.  They chose loyalty to the institution over their moral responsibility to protect children.  Paradoxically, the institution they loved was damaged even more by their 'loyalty' than by the original crime.

This affair in State College is not even a close call, it seems to me. Adults in charge have failed children, and now it has been exposed to the public. Those adults must pay the consequences of their actions.  That is called Justice.

But even beyond the call for justice, it remains a terrible tragedy for all concerned, and for that reason, very sad.  Flat out weeping sad.
Posted by Carl Lindquist at 10:22 AM